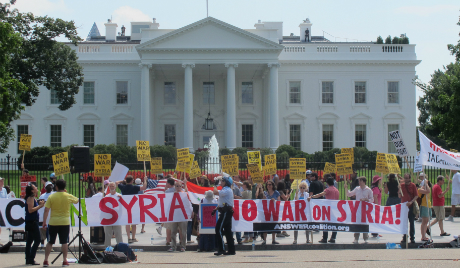 Tell Congress: No Aid to Terrorists – Hundreds of copies of a petition to congressmen demanding that aid to Saudi supported terrorists in Syria be stopped have been delivered by fax. With Nobel Peace Prize winner Barack Obama about to order military strikes against the secular government of Syria, now is the time to tell you congressman to stop this insanity. Your signed petition will be faxed to your congressman free of charge. See Petition here!

Obama “White Paper” questioned – Award winning journalist Kenneth Timmerman has posted another article at the Daily Caller exposing the Obama Administration’s misleading information on the alleged chemical attack in Syria. Timmerman says that the three-page white paper which was released “doesn’t even begin to reach the standard of evidence the public deserves and Congress should demand.” Read more
Murray exposes flawed Obama position – William J. Murray, chairman of the Religious Freedom Coalition, has been on numerous venues refuting some of the most oblivious false claims of the Obama Administration with regard to the alleged Syrian chemical weapons attack. The alleged attack on a “rebel” position happened on the very day that UN inspectors arrived in Syria. Hear Murray on the Mike Huckabee Show. Read more
Obama praise for jihadist group – Barack Obama recently recorded a video greeting to members of the Islamic Society of North America (ISNA), a group that was exposed as a co-conspirator in the Holy Land Foundation terrorist-financing case. ISNA is a Muslim Brotherhood front group. Obama praised ISNA on its 50th anniversary celebration for upholding “the proud legacy of American-Muslims contributions to our national fabric.” Read more
Congress
Voters overwhelmingly against Syria strikes – As an NBC news crew followed one congressman while he held more than a dozen town-hall meetings, the cameras clearly showed 90% or more of voters who attended were against Obama’s planned military strikes to help Islamist “rebels” take over Syria – Read more
Senator Rand Paul on Syria – Senator Paul had a few questions about those whom the United States would be helping with strikes on the Syrian government: “Are the Islamic rebels our allies? Will they defend American interests? Will they acknowledge Israel’s right to exist? Will they impose Shari’a? Will they tolerate Christians, or will they pillage and destroy ancient Christian churches and people?” Read more
Congress in recess – The House will return on September 9th as per the schedule posted at the beginning of the year by Leader Cantor. NOTE: Hearings on Syria are being held – however – the full House and Senate is not in session and no votes can be taken until after the 9th.
Religion and Culture
9-11 and the Gates of Vienna – Besides the anniversary of the 2001 World Trade Center attack and the murders of four Americans in Benghazi last year, September 11 also marks the 330th anniversary of the beginning of the Battle of Vienna in 1683, which stopped the Islamic advance in Europe – temporarily. But where Ottoman armies failed, Muslim immigration, homegrown terrorism, demographic jihad and multiculturalism are succeeding. Read more
New Attack on “Under God” – We are once again back fighting for “under God” in the Pledge of Allegiance, a battle that I thought had ended in victory in the 9th Circuit court of Appeals. In 2007 I wrote The Pledge: One Nation Under God to explain fully the history and need for having “under God” in the Pledge of Allegiance to our Flag. Now a new case using the same argument that was used to legalize same-sex marriage has been filed by an “anonymous” atheist who claims his child in a public school does not want to say “under God.” Read more
International
Morocco: Jailed for having Christian literature – In “moderate” Morocco, a young man has been sent to jail for 30 months for attending Christian meetings and having Christian materials. This is just one of the hundreds of stories of persecuted Christians that go unreported each week around the world. Persecuted Christians are of no interest to the Western media. Read more
Iran: New anti-Christian crusade – Iran’s Islamic leadership has launched a public campaign to halt the rapid spread of Christianity among Iranians. Iranian intelligence services are organizing meetings aimed at debating the “conversion from Islam” and to analyze why especially Iranian youth convert to Christianity, well-informed Iranian Christians said. Read more
Syria: Al-Qaeda awaits help from USA – Al-Qaeda terrorists eagerly await U.S. assistance against the Syrian government, so they can subjugate if not slaughter Syria’s Christians, secularists, and non-Muslims. Read more
Iraq: 14 car bombs in just one day – Nearly 60 people were killed and dozens injured in a series of car bombings across Baghdad on Tuesday. The blasts, which took place in predominantly Shiite districts, included 14 car bombs. Read more
More from the Religious Freedom Coalition
Christian Bookstore and more – books, CD’s, DVD’s, cards and much more available at the Religious Freedom Coalition Internet Store. Please visit today!