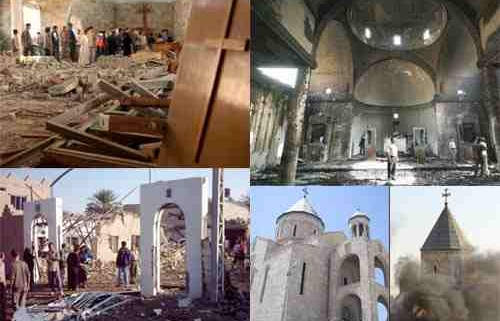 Leading spokesman for religious freedom says President Obama will make no serious effort to defeat ISIL terrorists because they are Sunni. William J. Murray, the chairman of the Religious Freedom Coalition released a statement in which he quoted both the Wall Street Journal and Washington Times as admitting the royal family of Sunni Saudi Arabia would not permit any genuine attempt to stop a Sunni onslaught of terror in the Middle East because it is Sunni based.

In 2012 the United States was training “moderate” fighters of the ISIL (ISIS) in Jordan, the same fighters that are killing and enslaving Christians in Iraq today. That training occurred because of the “urging” of Saudi Arabia and their desire to overthrow the secular leaning government of Syria which provides equal rights to Christians and other non-Islamic minorities.

In his powerful statement released in video form with graphics, Murrays says the only way to stop the tide of Islamic terror in the Middle East and the world is to shut down the funding state of that terror, Saudi Arabia:

“There is only one real solution to the problems of the Middle East. Instead of being the proxy warriors for the Saudi royals, the West needs to take control of Saudi Arabia and declare the oil fields the property of the citizens of that nation. Members of the Saudi royal family should have their ill-gotten wealth stripped from them worldwide and face the International Criminal Court for their crimes.”

Murray then explains the positive effect shutting down the terror funding center of the world would have:

“Once the Saudi center of Islamic evil in the world is gone, Western nations will be free to deal with Islamic terror elsewhere. This will also eliminate the distribution of Saudi textbooks filled with racial and religious hatred and preaching death to democracy in Islamic schools and mosques throughout the West. That alone will bring the recruiting of terrorists to a virtual halt. It is time to act against the real threat to Western civilization – the Saudi royal family

The same day that William Murray released this statement Congressman Frank Wolf sent a letter to President Obama saying “your conscience will haunt” for what America is allowing to happen to Christians in Iraq. In the letter he said:

“Your administration is aware of what is going on, yet you are doing nothing.  Just what is the point of having an ‘Atrocities Prevention Board” if it takes no action to prevent or stop atrocities?  When was the last time this board has met?  Has the board even been convened to address the genocide taking place in Iraq?” Wolf wrote.

“It is now clear to the nation and the world that your words were hollow; your ‘presidential directive’ apparently was nothing more than a token gesture.  You will come to sincerely regret your failure to take action to stop the genocide in Iraq.  Your conscience will haunt you long after you leave office.  Mr. President, say something; do something,” Wolf concluded. (Read more on Wolf letter)