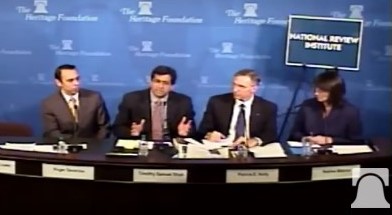 The panel was preaching to the converted for many of the well-known faces of politically involved Christians in the auditorium-filling audience of about 50.  Heritage’s Roger Severino described in now depressingly familiar statistics how Iraq’s Christian population had fallen from 1.5 million to 260,000 during the violence following Saddam Hussein’s 2003 overthrow.  Neighboring Syria’s post-“Arab Spring” convulsions had forced a third of that country’s Christians to flee, with 700,000 Syrian Christians forming 16% of the total Syrian refugee population.

“We are talking about the elimination of Christianity in its cradle,” stated National Review editor Kathryn Jean-Lopez.  Severino said that the Islamic State in Iraq and Syria’s (ISIS) targeted killing of Christians and associated atrocities such as sex slavery “should be labeled what it is, it is genocide,” a label that deserved congressional recognition.  Persecution from ISIS and other jihadist groups even follows Christians into United Nations High Commissioner for Refugees (UNHCR) camps, he and Patrick Kelly from Knights of Columbus discussed.  Accordingly deterred from these camps, Christians comprise only 1% of UNHCR registered refugees, Severino noted.

Amidst this litany of Middle Eastern woes Shah suddenly disconcertingly directed criticism towards the American political scene while discussing religious freedom’s philosophical roots in individual human dignity.  He stated that

Shah linked such rhetoric from presumably public figures like Ben Carson, Franklin Graham, and Donald Trump with criticism of past Mideast Christian political initiatives. In the Middle East, he stated,

many Christian political projects have been conceived with the good intention of protecting Christian interests, but because they weren’t rooted in a radically inclusive vision of religious liberty, rooted in a vision of human dignity, they failed.  They helped create insecurity for other people; they helped unleash tribal tensions and divisions.  We should ask ourselves whether our own political leaders in this country, whether candidates for president, whether religious leaders, are creating a climate of radical inclusion in terms of religious freedom or a climate of tribalism and division.

Shah elaborated that the development of the Arab nationalist ideology of “Baathism was in part a Christian project” developed by Arab Christians like Michel Aflaq.  Fear of Iraq’s Shiite Muslim majority, he stated, meant

Baathists practiced a version of what might be called apartheid secularism…in part an invention of Christians going back to the 19th century because they were convinced that only under a radical secularist state that marginalized Islam would they be safe.  It made sense….Unfortunately their system suppressed the freedom of others actively, systematically, over decades and the consequences are clear.

Shah’s comments mix basic truths with fundamental errors.  Statements from Trump and others, however poorly articulated, concern real dangers from aggressive and authoritarian aspects of Islam, a faith that has traditionally encompassed both politics and piety.  Inadequately stressed by Shah, Mideast Christians in turn have historically sought protection against these dangerous doctrines of Islam that originally drove the Arab conquest of the Middle East and North Africa (MENA).  Assimilation under Arab-Muslim rule with its dhimmi oppression of non-Muslims reduced through the centuries MENA’s indigenous Christian-majority populations like the Aramaeans and Copts to beleaguered minorities.

Shah’s call for Mideast societies “rooted in a vision of human dignity” appeals to Westerners, but has had little success in convincing Muslim-majority societies to abandon Islamic supremacy.  Foreign military interventions in places like Afghanistan, Iraq, and Libya have in many ways had precisely the opposite effect of the campaigns’ proclaimed goals of furthering democracy.  Afghanistan and Iraq, for example, received sharia-espousing constitutions according to the wishes of local populations “liberated” by American-led regime changes.

Contrary to Shah, this overthrow of dictatorship unleashing previously contained Muslim hostilities is the immediate cause of the Iraqi Christian persecution addressed in an audience question by Accuracy in Media’s Mal Kline.  He asked the panel whether Iraqi Christians were better off under Hussein, to which Severino responded that at least “their churches were not being bombed under Saddam like they have been since the Iraq war.”  Interestingly, panelist Nadine Maenza from Senator Rick Santorum’s Patriot Voices noted that Iraqi Yazidis had indicated to her that conditions under Hussein were actually worse than now with ISIS.

Despite Shah’s criticisms, only realpolitik has previously protected Mideast Christians, not idealistic support for universal human rights derived from the Judeo-Christian understanding of man as imago dei referenced by Shah.  Mideast Christians supported dictators relatively disinterested in religion in order to enjoy some autonomy under regimes in which most would be equally subordinate, contrary to his curious phrase “apartheid secularism.”  A Shiite-dominated Syrian Baathist dictatorship ruling a Sunni majority and its Iraqi Sunni-dominated counterpart ruling a Shiite majority were thus preferable for Christians to active Muslim persecution.

Other past and present Mideast strategies for protecting minority rights also required hard power, such as the protection Christians previously received against Muslim-majority populations from European colonial powers.  Christian communities currently exposed to ISIS’ wrath have similarly demanded foreign aid in creating their own safe havens and self-defense forces not dependent upon cooperation with Muslim Arabs or Kurds.  Precisely the one Mideast minority that has successfully defied Arab-Muslim domination with a minority-respecting democracy is Israel’s heavily-armed Jews, the Israeli Arab-Christian diplomat George Deek has noted.

Shah himself took a realistic approach distinguishing Christians and other Mideast minorities from Muslims when discussing American asylum for refugees.  As Maenza noted, these minorities in Iraq and Syria are fleeing persecution and cannot safely relocate in the region, as the UNHCR camps have shown, in contrast to Muslim refugees who are usually merely fleeing conflict.  “It’s not imposing a kind of invidious or an inappropriate religion test to prioritize Christian refugees,” Shah stated; “it’s not a religion test, it’s a persecution test.”

Georgetown’s unwillingness to address Islam’s darker sides, characteristic of modern academia, helps explain the “widespread apathy and indifference and ignorance” concerning current Mideast Christian suffering bewailed by Shah.  “Where are the widespread demonstrations, where are letters by thousands and thousands of pastors to appropriate leaders to do more about this, where are the spontaneous grassroots campaigns?”  He complained that “in general, our churches are missing in action” and called for greater emphasis on the Mideast’s current slaughter in church activities, noting that the Crusades mobilized perhaps millions for the Holy Land.  Yet Crusaders are unlikely to find modern mass movement parallels when Georgetown and other Christian-affiliated institutions seemed more interested in avoiding awkward subjects for the sake of appeasing Muslims.

Contrary to Shah’s hopes, Islam, and not any commitment to individual rights, remains at Arab identity’s core.  Mideast Christians sadly discovered this when they advocated secular Arab nationalism as a means of minimizing Christian-Muslim divisions.  Even Aflaq’s effusive praise for Islam as a constitutive element in Arab character could not assuage Islamic power proclivities, and he himself possibly converted to Islam near the end of his life.

Accordingly, the kind of MENA Christian-Muslim cooperation described by Maenza is likely to remain rare for the foreseeable future.  Working with the religious freedom foundation Hardwired, she had cooperated with courageous Sudanese Muslims to free the imprisoned Christian Meriam Ibrahim.  Yet such incidents would not justify Shah in denouncing as “nativist” the comments of Maenza’s boss, Santorum, who has condemned “jihadism” and “sharia” as evil and stated that “Islam is different” from other faiths.

For freedom to have any chance in the Muslim world as desired by Shah would demand a long struggle that must begin with clearly identifying Islam’s anti-liberal elements.  Such clarity occurred the day before his remarks at a Heritage panel of Muslim reformers mentioned by Severino and is beginning to emerge, however amateurishly at times, in America’s political debates.  Shah’s remarks, which smacked of blaming the victim in a reversal of oppression-reaction cause and effect, often obscured rather than enlightened.