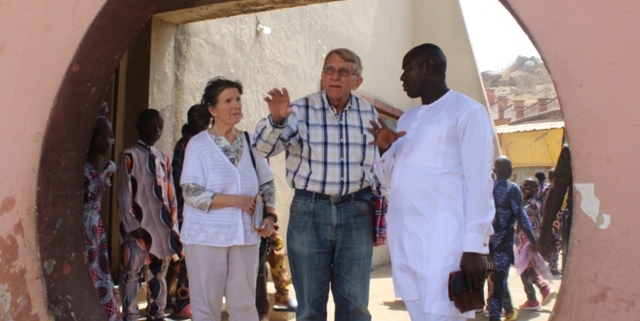 In this issue of the newsletter
New: Finally, in Nigeria – Two years of attempts at a mission trip during Covid-19
New: Commissioning of our new school building at IDP camp in Benue State, Nigeria
New: Visit to former orphanage site attacked and destroyed by Sunni Muslims
New: Conditions at the new orphanage site in Jos are not ideal, but usable

A lot changed in two years: On February 24, 2020 my wife Nancy and I obtained visas for a mission trip to Nigeria. The special two-year visas were based on a letter of invitation from Benue State governor Samuel Ortom.

Our mission trip, planned for March of 2020, had two goals. First was to visit mission projects in Benue State associated with Christian IDP camps. Second was to visit the orphanage we had taken financial responsibility for in Miango which is north of Benue in Plateau State.

I had visited the orphanage in 2018 and found what I can only describe as unlivable conditions, with poor sanitation and a lack of clean water. The budget lacked sufficient funds for proper diet.

Over a period of two years, our ministry made significant changes at the orphanage in a number of ways. I ordered new wells drilled and had a water tower built, ran new plumbing, put in working toilets and upgraded the kitchen. In addition, a feeding program added protein to the children’s diets. They had been eating gruel (a cereal) daily with protein just twice a week. Under our program, costing thousands of dollars a month, the 168 children received protein twice a day.

I also authorized and funded a farming program for 2019 that allowed the children to help produce their own fresh food. The farm was enormously successful the first year producing tons of Irish potatoes, soybeans, peanuts, corn and fresh vegetables. The children were gaining selfassuredness and skill sets rather than just receiving charity.

Two days before the March, 2020 departure our flights were cancelled because of Covid-Nigeria locked down and allowed no foreign flights. At the time I did not know that the cancellation would mean that I would never visit the Miango orphanage location again.

I was deeply disappointed not to be able to visit these children again. I had fallen in love with these young victims of Sunni Muslim terror, and I was determined to continue to help them find new lives after their parents had been slaughtered.

But time and again roadblocks were set up that stopped the mission trip to Nigeria.

More mission trips cancelled and then disaster – Nancy and I attempted to visit the orphanage and other projects in Nigeria several times in 2021. Each time some cancellation of flights occurred. In the summer of 2021, we were booked on Air France.

We changed to Lufthansa and the flight from Frankfurt to Abuja was cancelled just one day before we were to depart for Nigeria.

If that last flight had not been cancelled by Lufthansa both Nancy and I would have been at the Miango orphanage when it was attacked and overrun by Sunni Muslims.

Seeing the damage myself: In late January we were finally able to fly to Nigeria.

Tears came to my eyes when we stopped at the destroyed Miango orphanage. All eight of the buildings that housed the children burned out and roofs — collapsed. The chapel burned out. The classrooms, kitchens and offices destroyed. What was not destroyed was stolen.

On the main gate into the orphanage was painted, “This is Fulani land – No Christians.”

On the drive to the orphanage there was carnage along the road. For miles we saw burned out homes and churches and in some areas the cattle of the Sunni Muslim Fulani Herdsmen were grazing. Many had died, but all the orphans escaped.

The new Jos location: All the children are now located in just one building. It is cramped with sometimes more than a dozen children in one room. The bunk beds that were two high at the old location are now three high in some rooms at the new location.

The children now have to eat meals in shifts because of lack of space. The kitchen is located outside. The building needs a lot of work. We already paid for plumbing repairs as the children were not able to shower.

We have a two-year lease, and the building is available to buy. We can buy the land and building and add on to make it more comfortable or we can continue to rent until we find a better location or build something new. Careful planning and considerations must be made but for now the orphans have a place to sleep, eat, learn and be nurtured in the Word of God.

On pages two and three of this newsletter I am sharing photos of the Miango location that was destroyed along with photos of the new location, which may only be temporary. I will share more news about the overall mission trip in the next newsletter.

The queen of the TIV Tribe was the principal speaker at the commissioning of the new school building. The curriculum will be based on Christian Biblical values. We also repaired and outfitted two other buildings at two other IDP camps for displaced Christians.

In the next newsletter I will go more in depth about the situation in Nigeria for missions and for the Christians who live there. It is dangerous and I will go into that as well.