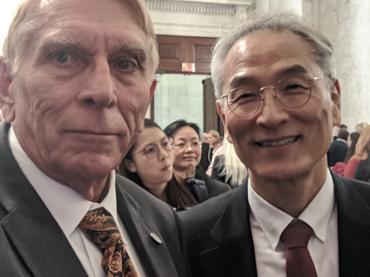 Christians and other religious minorities are persecuted by the Xi government just as badly as the Muslims. Yet, it is the Sunni Muslims of China who receive American support. Many of these same Chinese Sunni Muslims volunteered to fight for the Islamic State in Syria and Iraq.

On the other hand, the IRFR with the support of Senator Brownback has brought a lot of issues to the attention of President Trump, Congress and the American public.

Ambassador Brownback and the influence of the many groups making up the IRFR resulted in Nigeria being added to the “Special Watch List” of those nations repressing religious freedom. At the very least President Buhari got a wake-up call that was followed by a tap on the shoulder from President Trump.

As president of the Religious Freedom Coalition I make sure that we sponsor special events held by the IRF such as the meeting held on February 4th, the same day as the National Prayer Breakfast. More than 300 attended the special meeting from all over the word. As a group leader and sponsor, I sat at the head table.

Next to me sat the Vice-President elect of the Republic of China (Taiwan). The Chinese Communist Party (CCP) was furious that he was in Washington, as they view Taiwan as a renegade state of mainland China. Dr. Lai is a Catholic. While Christians in China are jailed, some in Taiwan such as Dr. Lai hold major offices.

The results of the February 4th meeting we sponsored, as well as the overall efforts of the IRFR were made very clear the next day when Secretary of State Mike Pompeo announced on February 5th the launching of the International Religious Freedom Alliance (IRF Alliance).

Pompeo said it was, “… an Alliance of like-minded partners who treasure, and fight for, international religious freedom for every human being.” Initially the coalition will include 27 nations including the United States, the United Kingdom and others.

The planning for the alliance of nations for religious freedom began after July 18, 2019, at the second Ministerial to Advance Religious Freedom in Washington DC. The Religious Freedom Coalition was a major player in the July 19th meeting.