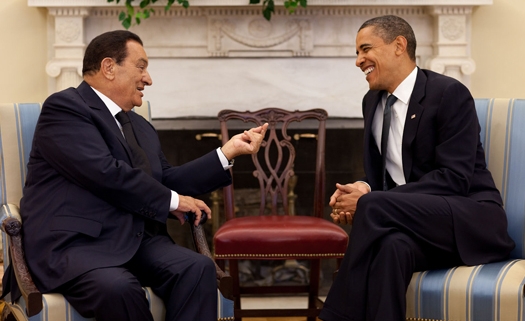 OBAMA’S FROZEN REACTION TO EGYPT – Just two years ago Barack Obama delivered a speech at Cairo University lauding the greatness of Islam. Today the streets in front of the university are bloody as demonstrators rally to bring down the secular government of Egypt headed by Hosni Mubarak for the last 30 years. The last liberal president to help get rid of an Arab secular government was Jimmy Carter, who gave us the Ayatollah Khomeini and made Iran the main sponsor of terrorism in the world today. George W. Bush toppled the secular government of Iraq and of course that has really worked out well, hasn’t it? Even someone as ill versed in foreign affairs as Barack Obama and his sidekick Hillary Clinton realize that toppling the secular government of Egypt can lead to yet another center for terror activity in the Middle East and as a result Obama is frozen, unable to do or say anything about the unrest there.

THE CONGRESS
CONGRESSMAN OFFERS BILL ON RELIGIOUS MINORITIES IN THE MIDDLE EAST – There is increasing violence and targeted attacks against Christians in various Islamic nations including Iraq, Afghanistan, Pakistan and Egypt. Congressman. Frank Wolf (R-VA) this week introduced a bill to create a special ambassador from the U.S. State Department for religious minorities in these areas of concern. “If the international community fails to speak out, the prospects for religious pluralism and tolerance in the region are bleak,” Wolf said in introducing the bill. “President Ronald Reagan once said that the U.S. Constitution is a ‘covenant that we have made not only with ourselves, but with all of mankind.”’ Without an international spotlight forcing governments in the region to protect religious minorities, the attacks will continue.
IN GOD WE TRUST – Congressman Randy Forbes (R-Va) reintroduced his resolution to reaffirm ‘In God We Trust’ as our national motto. (H.Con.Res.13). Forbes wants to reaffirm the motto in light of President Obama having stated incorrectly on several occasions that our national motto is E pluribus unum. Forbes is the founding member of the Congressional Prayer Caucus.

RADICAL MUSLIMS AND THE OTM PROBLEM – OTM means “Other than Mexican” when referring to people being smuggled into the US from Mexico. This past week, U.S. border agents found a radical Muslim cleric who had been deported from Canada and banned from France in the truck of a BMW entering the US from Mexico. Said Jaziri was one of the Imams who issued a death fatwa against a Danish cartoonist who drew pictures of the Mohammed. The car was driven by Kenneth Robert Lawler. Read more

SUICIDE BOMBERS AT OUR BORDER? – Well, at least the book is. “In Memory of Our Martyrs” was found this week by the Border Patrol near the Casa Grande while looking for illegal drugs. The book, published in Iran, contains short biographies of Islamic suicide bombers as well as their final letters to their families. Homeland security saw no issue with the book, telling news agencies, “At this time, DHS does not have any credible information on terrorist groups operating along the Southwest border.” Hmmm.

NO 911 MOSQUE!
NEW IMAM: JAIL INSTEAD OF DEATH FOR APOSTATES – The new Ground Zero mosque imam wants to prove to the world that he is indeed moderate. World Net Daily found a lecture Abdallah Adhami gave in November, 2010 in which he stated, “If someone leaves the din, leaves the path privately, they cannot be touched. If someone preaches about apostasy, or preaches their views, they’re jailed.” Actually this is rather moderate for an Imam and goes against the Qu’ran which calls for death for anyone leaving Islam. Read more
GOOGLE REFUSES TO ALLOW VIDEO AD – Anyone can promote a Youtube video, unless Google doesn’t like it. Our commercial against the Ground Zero mosque is located www.youtube.com/No911Mosque. An account was opened with a valid credit card and key words were added to “promote” the video. Nothing happened, no impressions, no clicks, nothing, although the promotion showed as active. Google refused to respond to emails. Several faxes over several weeks were sent to Goodle’s offices and they have simply refused to answer. Why? The ad was not allowed to run because of pro-Islamic bigotry on the part of Google. Your help is needed to get the ad out. Please look at the ad at www.youtube.com/No911Mosque and then share it on Facebook and email it to friends. We need your help.

INTERNATIONAL
DEMOCRACY IN EGYPT? – The first question we need to ask is why all the street violence in the Middle East right now is against secular governments, not against totalitarian Islamic governments. There are calls from the right and left in the United States to allow the toppling of the secular government of Egypt, but what would replace it, the Muslim Brotherhood? Social conservatives should ask how the fall of a secular government there would help the tormented and repressed Christians of Egypt. Would it be replaced with the type of government we have helped establish in Iraq, where 60% of the Christians have been displaced? Worse yet, we all remember what happened when Jimmy Carter got rid of the secular government in Iran in the 1970’s. True “democracy” in Egypt means one election that will bring in Islamic extremists who will then build bases for terror attacks against the West. Let’s think this over a little before we act.
EGYPT ALREADY MOVING TO EXTREME – In an article in the official Egyptian government weekly Al-Liwaa Al-Islami, author Hassan Al-Hafanawi wrote that Israel’s destruction was inevitable because it was prophesied in the Torah, the New Testament, and the Koran. Read excerpts at MEMRI
NUCLEAR WAR IN 18 MONTHS? – If Egypt’s secular government falls, no other secular government in the Islamic world will last more than a year, as the revolt spreads and the extremists take control. Pakistan’s fragile secular government will fall to Muslim extremists within six months of a collapse of Egypt, and their more than 100 nuclear weapons will soon be distributed to nations surrounding Israel. A limited nuclear engagement will follow. This is not from the news; this is a prediction of the editor of this report, William J. Murray