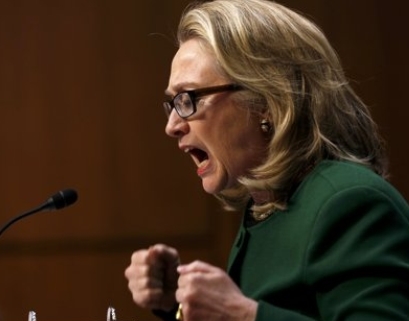 Hillary Clinton at her best

Hillary: What difference does it make why they died? – In one of the most bizarre testimonies before Congress that I have ever seen, the U.S. Secretary of State said about the murder of one of her Ambassadors, “What difference at this point does it make?” It might make a difference to a Coptic Christian whose trailer for a bad movie was blamed by the leader of the free world for a series of Al Qaeda attacks against American diplomatic facilities and who was sent to prison on the orders of members of the administration. Read more
Obama: “Peace in our time” – Apparently no one in the entire White House has ever studied any 20th century history at all. (If they had, there would be some realization that Communism failed). Beyond that, Obama used the term “Peace in our time” in his Inaugural Address. This phrase was first used by Prime Minister Neville Chamberland upon signing an agreement with Hitler in 1938, giving part of another nation to the Nazi’s in return for “peace.” What a gaff – or was it? Read more
Obama supports death on Roe anniversary – President Obama’s statement on the 40th Anniversary of Roe v. Wade speaks for itself. He talks of a woman’s right to make “decisions” about her own body … but it is not the woman’s body that is destroyed by an abortion; it is her baby’s body.
Congress

Senators support Right to Life March – Pro-life Senators sent out tweets to mark the 40th anniversary of the infamous Roe v. Wade decision. This Supreme Court ruling legalized abortion on demand as a “privacy” issue. The decision has resulted in the killing of an estimated 50 million unborn babies since then. Only Mao Tse Tung has killed more human beings – an estimated 60 million. Read more
Republican Leader supports Right to Life March – Majority Leader Eric Cantor honored pro-lifers for their commitment to the right to life of every unborn child during a floor speech this week. In contrast, President Barack Hussein Obama, who is the best friend Planned Parenthood can buy, issued a proclamation celebrating the Roe v. Wade ruling as a victory for women, the “freedom to choose” and the right to privacy. Read more
Religion and Culture
Right to Life March – Hundreds of thousands of people descended on Washington, DC today to morn the loss of 55 million American babies who have been murdered since the Roe v. Wade decision which allows the termination of a pregnancy up to the moment a woman goes into labor. Most of the establishment news services will not report, or will under report, the significance of the size of the demonstration.
Christian Bookstore and more – books, CD’s, DVD’s, cards and much more available at the Religious Freedom Coalition Internet Store. Please visit today!
International

EGYPT: More Arab Spring attacks – A thousand Muslims attacked the predominantly Christian village of el-Marashda (province of Quena, Upper Egypt). Incited by outside religious authorities, extremists burned down homes and shops and tried to demolish the local church. Read more
JORDAN: Syrian refugee girls taken for Islamic “pleasure marriages” – Syrian female refugees aged 14 and 15 who fled their country to Jordan and Iraq are being forced into “pleasure marriages. “Apart from being a cover for legalized prostitution (the marriage can last for as little as 30 minutes), Nikah al-Mut’ah (temporary marriage) deprives the “wife” of many rights. Read more
Arming the enemies of freedom – French cannon makers sold the Ottoman Empire the weapons which were used to conquer Constantinople in 1453. This week the United States began shipments of 20 new advanced F-16s and 100 modern Abrams tanks to Egypt. Soon Turkey will receive the newest American fighter, the F-35. My latest column at WND, and a video I have produced, explore the results of the the West arming the enemies of freedom. Read more
The Jewish Terrorist – In March, 2008 during the Jewish holiday of Purim a bomb exploded in the home of the Ortiz family in Ariel, Samara. The Ortiz family are dear friends of mine and I have stayed at their apartment numerous times. Only their youngest teenage son was home home at the time the bomb exploded, and he was just one foot from the bomb. He was severely injured and spent over a year in hospitals and had dozens of operations. Because his father David Ortiz took the Gospel to Arabs in the area, it was assumed that the attack came from them, but it did not. An American-born Jew who had become an extremist set off the bomb. He had also killed Palestinians and bombed a church. The strange case ended this week with his conviction for murder and attempted murder. The Israeli media coined the phrase “the Jewish terrorist” to describe him. Read more Note: The Religious Freedom Coalition raised funds for the Ortiz family to rebuild their lives.
More from the Religious Freedom Coalition
New Chairman’s Report – Now available, the January 18th, 2013 edition of the Religious Freedom Coalition Chairman’s Report. In the current issue: William J. Murray writes on hot tub multiculturalism / Obama’s gay inauguration – no evangelicals allowed / Obama sends tanks to the Muslim Brotherhood / More social conservatives in Congress, including two new Senators / Planned Parenthood got $542 million of your tax dollars last year / Al Gore and Rupert Murdoch make big bucks on Jew hating TV networks
My Life Without God – William J. Murray’s first book, My Life Without God is now back in print as the 30th anniversary of his atheist mother’s lawsuit to remove prayer form the schools approaches. Murray writes of his life in the dysfunctional home of infamous atheist/Marxist leader Madalyn Murray O’Hair. Learn more
Christian Bookstore and more – books, CD’s, DVD’s, cards and much more available at the Religious Freedom Coalition Internet Store. Please visit today!

The ballot box will not tame Islamism
Scroll to top