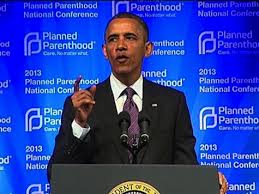 No president has stood for death and the destruction of the true church of Christ as has Barack Obama. He is a modern day Manasseh. Barack Obama has supported the takeover by the Muslim Brotherhood of several nations and the result has been the brutal treatment and murder of Christians. In Syria his Administration has supported Islamist fighters who have bombed schools and slaughtered women and children. It is no surprise then that he would take to the stage and ask God to bless abortionists who kill the most helpless and innocent among us.

President Barack Hussein Obama seems to love the death of others and he seems to believe that God should bless those who murder the innocent. Such a leader of a nation has probably  not existed since the reign of Manasseh, son of Hezekiah who worshiped Baal at the Temple. Manasseh sacrificed his own son to the Canaanite god Moloch, who was worshiped with the burning of children. Yes, I believe Barack Obama is that bad.

Gary L. Bauer, the former presidential candidate who is the president of American Values described Barack Obama’s presentation to Planned Parenthood the best in his daily email. First Bauer pointed out that Obama was the first president ever to address a meeting of Planned Parenthood.

At the end of his speech, Obama did something truly astonishing. He said, ‘Thank you, Planned Parenthood. God bless you. God bless America.  Thank you.”

For many men and women of faith, that was a jarring, perhaps even shameful, moment.

In an administration full of shameful moments, that may have been the most shameful of all.

The focus of the Religious Freedom Coalition, of which I am chairman, is the persecuted church. A national leader asking God to bless abortionists is more than an attack on the church, it is an attack on God Himself. In his closing remarks at the Planned Parenthood convention Barack Hussein Obama petitioned God to bless baby killers.

There is only one modern religion in which God is opening petitioned to assist in murder and that can be heard in the cry of “Allah Akbar” by Muslims as they slaughter Christians in Nigerian villages or set off bombs at the Boston Marathon. Perhaps if Obama would have paid more attention at church as an adult and less attention at a mosque as a child he would not ask God to bless those who kill the innocent.