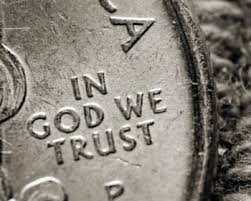 Our national motto is still safe from militant atheists.

The following is reprinted from the Congressional Prayer Caucus newsletter. Congressman Randy Forbes (R-VA) co-chairs this committee. Read “The Pledge: One Nation Under God” by William J. Murray to learn about the national motto, the Pledge of Allegiance, and the history of Christianity and religious liberty in the United States.

On Wednesday, May 28, the Second Circuit Court of Appeals upheld the constitutionality of the national motto, “In God We Trust,” on U.S. currency, in Newdow v. Peterson.

Summary of the Decision

The Second Circuit affirmed a federal district court’s dismissal of a challenge to the national motto, “In God we trust.”  The court stated that the motto’s inclusion in the design of U.S. currency, which is required by statute, is “a reference to our religious heritage” and does not violate the Establishment Clause or the Religious Freedom Restoration Act (RFRA).

The court noted several times that the “[Supreme] Court’s Justices have distinguished our currency from improper governmental endorsements of religion,” repeatedly indicating that the statutes requiring that the motto be included on U.S. Currency “have a secular purpose and neither advance nor inhibit religion.”

This is the fifth time that the constitutionality of these statutes has been challenged, and the fifth time such a challenge has failed.  Similar decisions have been issued by the Fifth, Ninth, Tenth, and D.C. Circuits.

In January, 2013, the Freedom From Religion Foundation (FFRF) filed a lawsuit against the U.S. Treasury Department, claiming that the inscription of the national motto, “In God We Trust,” on U.S. currency is an unconstitutional violation of the Establishment Clause.  Attorney Michael Newdow represented FFRF and 19 other plaintiffs who, argued that they were forced to proselytize for a deity in whom they do not they believe each time they handled money.  The federal district court dismissed the case in September, 2013.

Forty-one Members of the House of Representatives signed an amicus curiae brief to the federal district court, supporting the motto and articulating how “In God We Trust” is a reflection of the historical fact that America was founded on a belief in God.  “The Establishment Clause was never intended as a guarantee that a person will not be exposed to religion or religious symbols on public property, and the Supreme Court has rejected previous attempts to eradicate all symbols of this country’s religious heritage from the public’s view.”